If you have not read “A Grey Perspective: Part I“, please stop and read it.

I left off saying that a similar line of thought regarding Hollywood and the Oscars can be applied to what is going on in South Africa.  Why?

To recap, there’s a housing crisis this semester at UCT.  From what I understand, some students are not able to receive university housing for the academic year.  There was even a call to UCT staff to help with the situation.

When students, predominantly black students, are being denied housing either because they can’t afford it or the university is only accepting students who could pay for it immediately (without waiting for financial aid), they were called out: “racism”.

Students rallied together and protested again.  Their methods were quite outrageous.  They occupied spaces and built this symbolic shack. 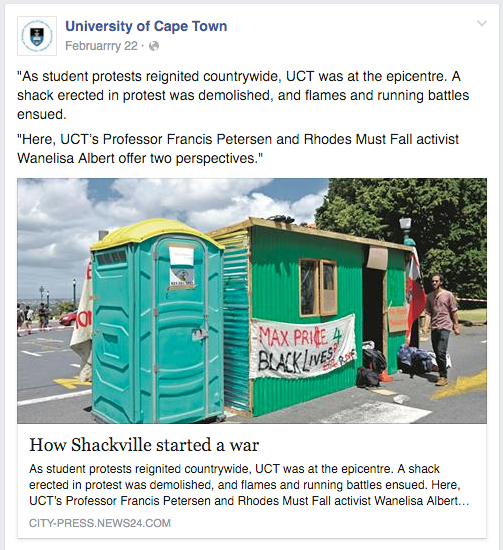 They burned down Jammie shuttles and threw feces and other sewage waste into buildings.  They burned lots of historical art pieces.

Many have argued that they have gone too far.  Two of my friends, one black South African and one Indian South African, have both expressed to me that these acts of protests are bad.  They are destroying property and making others feel unsafe.  I read Facebook comments, usually from white South Africans, that said these protestors should be expelled for the vandalism that they have caused and that they should probably be grateful for being offered an opportunity to attend such a prestigious university like UCT.

Like the situation at the Oscars, the racism isn’t explicit.

Below is a picture of a WhatsApp conversation I was having with a friend: 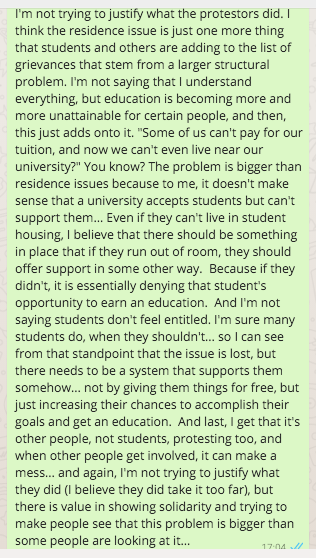 In this conversation, I was trying to point out that there’s something more than the black and white (which can be literal) perspectives.  There’s a greyness that I’m trying to highlight here.

The situation in UCT seems to be polarized.  One side of the debacle is saying UCT is racist because they are denying black students from housing and receiving their education.  Therefore, they need to make a statement (with their actions) and hold the people at the top making these decisions, accountable for the discrimination, oppression, and repression that they feel.  How is it, after 20 years since the end of apartheid, that black students are still being denied an education that the ANC had promised to make attainable to them?

On the other side, people point out that it is an equal opportunity.  You are allowed to attend UCT if you get in.  You are allowed to register for classes and live in student housing if you can afford it.  My Indian South African friend pointed out that it’s not just black students that are being denied these resources, white students are too.  When there is a shortage of housing available, then it makes sense that students who can pay for it get to live in it.  Education isn’t free.  This is, for the lack of a better way to say it, just good business.

But, as I said to my friend, this is a bigger problem than people think it is.  University housing is just one issue in a bigger structural problem.  UCT isn’t racist, but the education system is built upon a systematic racism that is not longer explicit.  There’s a reason why most of the students getting denied housing are black students.  There’s a reason why the students who have large debts are black students.  And even more so, there are many black students who can’t even get loans because they may not be good for it – making education even more unattainable for them.  It’s rooted in apartheid.

It’s only been about 20 years since the end of apartheid, and the effects of apartheid still linger in society.  There has been iniatives for reform, but with so many counts of corruption against the government, it just seems like there’s not enough being done.

I think the white South African population (generally, speaking here) don’t realize the kind of privilege they have because they had advantages during the apartheid era.  Then, when they see that now opportunities are expanded to black people, they say that the system is now fair.  But, it takes more than 20 years to get the entire black South African population to get to the level at which the white population, because they were able to reap advantages for decades before that.

Actually, it’s even argued that there are systems in place that make it hard for poor people, who are predominantly black, to rise in the socioeconomic ladder.  Social programs offered now are not as generous as they were during apartheid, when only white people could benefit from them.  Now, people have to rely on the market for certain social services, and when black people can’t afford it, it only perpetuates their poverty.  Additionally, so many people are still unable to move out of the townships, where there is poor housing infrastructure (multiple families have to share one bathroom), poor sanitation, and high prevalence for non-communicable diseases, HIV/AIDS, and violence/domestic abuse.  These things affect standards of living and health, and therefore, make it even harder for these populations to do well in school or diligently work their jobs.  I can say more, but I just wanted to make the point that for black people, even in the post-apartheid era, it is still relatively more difficult to earn their opportunities.

Additionally, anti-protestors also have a problem with the sense of entitlement black students have for a free education.  While I was there, a lady at a hair salon, who was white, expressed to me that she had to work to put herself through school, so black students can’t just expect their education to be free.  I do see that some black students do feel entitled to a free education, probably as a form of repayment for the oppression of their families in the apartheid years.  But, I also see that students are willing to put in the work for their education, but they constantly feel like they face so many barriers to their education.  It can be very frustrating.  Most of the black students that I’ve met at UCT are from affluent families, but their status cannot be representative of the black South African population as a whole.

The grey in this perspective is that the situation – as with many instances regarding access, education, finances, and racism – is complicated.  There are historical processes in play and many perspectives to consider.

Is UCT racist?  No.  Are students going too far in their protests?  Probably.  Is there underlying racism that prevents black students from getting an education?  Yes.

What can we do about it?  As I mentioned to my friend, I think the government has to do more to expand opportunities to the black population and support them.  It’s probably not going to come from making tuition free.  Over the past few years, the level of government subsidies towards tertiary education has been declining, and therefore, the share of student contribution is increasing.  Unless the government allocates more money to education, poor students (who are predominantly black) will probably find it harder and harder to receive an education.  Additionally, reforming the health care system so that more people can have access to quality and affordable health care is important.  Funneling money into townships so they could build better schools or renovate their housing infrastructure.

I don’t have the answers, but I just wanted to present a grey prespective to a seemingly black and white issue in South Africa.  Even though opportunity to study at UCT is granted to those students who have demonstrated merit or can afford their education (and not on any notions of race), black students just don’t stand at the same level as their white counterparts.  Because of their history, it is just so much harder for them to do well in and afford school.  In that spirit, I can see why protests are necessary; they are highlighting the institutional racism and inequality that still exists in society, and the government is not doing enough to mitigate it.

PS. I’ve made a lot of generalizations about certain groups of people in this article.  I am not saying that all people of these groups think this way.